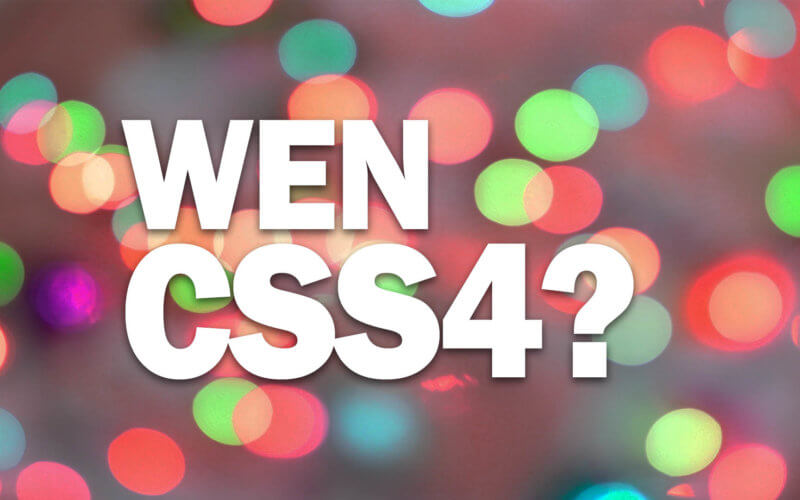 Since its release, CSS3 has become a widely-used and important part of the web development landscape. It introduced several new key features that are critical to web development such as media queries, flexbox, animation, shadows, gradient, transform, pseudo-class (our beloved :before and :after) and rounded corner.

CSS3 was first officially published as a W3C Recommendation in 1999. It’s been more than 2 decades since then but there is still no “CSS4”

The reason why there is no official version of CSS called “CSS4.” is the CSS Working Group at the W3C (World Wide Web Consortium) has adopted a “living standard” approach to the development of CSS, which means that the specification is continually updated and new features are added as they are developed and agreed upon by the Working Group.

This approach is intended to allow for more flexible and agile development of the CSS language, rather than waiting for a large release every few years. It also allows for new features to be implemented and used by developers more quickly.

In short, there will be no CSS4 CSS5 anymore. Each feature will be developed and released independently.

Each of CSS module has their own specification level. For example, media queries is now at level 4 while some other modules are still at level 2 and 3. They are not tied to any CSS “version” and is up to browsers to implement support.

However, you may occasionally see references to “CSS4” in some contexts, such as in discussions about the future direction of the CSS language or when grouping together a set of new features that are being introduced at the same time. In these cases, “CSS4” may be used informally to refer to a hypothetical future version of CSS that includes a particular set of features.

There might be no CSS4 but if you are looking for cool CSS tips or tricks tutorials, don’t forget to check our website or our YouTube Channel. For example, here is our tutorial on how to use CSS SVG Mask